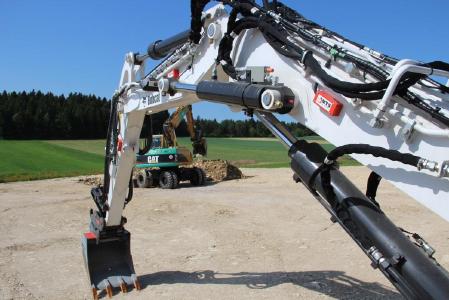 (PresseBox) ( Kirchheim unter Teck, 17-05-30 )
Inclination sensors measure the orientation angle of an object in relation to the environmental gravitational field. They are used in many applications including construction machinery, wind turbines, solar tracking and machine leveling systems. They are also used for automotive applications and medical equipment as well as in the consumer market.

The functional principle of the fluid tilt or inclination sensor from 2E is based on the capacitance change produced by the sensor tilt angel in relation to the Earth’s gravitational field. The sensor consists of a shorty cylindrical cavity formed by two half housings and a spacer disk. This cavity is half-filled with a dielectric fluid. On one side of the cylindrical cavity there are two semicircular electrodes and a circular electrode on the other side. When the angle of the sensor is changed, the dielectric fluid maintains a horizontal position as a result of gravitational force. Through the configuration of the electrodes an inclination angel dependent on the differential capacity is formed between the electrode pairs which is then measured and evaluated by the electronic circuit.

Compared to other systems currently available, this sensor can be used through a full 360°measuerment range. The sensor has in-built internal temperature compensation and achieves a high accuracy of < ± over the entire measurement range. It is suitable for all applications on the Earth as the measurement value is independent of acceleration due to gravity at the measured position. The internal temperature compensation allows the sensor to be operated over a wide temperature range from -40 to +85°C .

The sensor’s aluminum housing complies with protection class IP67 and is therefore suitable for use in harsh environments.

The angle of inclination measurement can be read directly over the chosen interface (RS485, CAN). The interface can have an address assigned so that multiple sensors can be used on the same bust without conflict. An analog current-loop interface (4-20 mA) is also available. The sensor’s modular design allows customer-specific requirements such as special interfaces or mountings to be easily accommodated. A PCB version without an enclosure is also available for integration into OEM applications. This offers control interface via I²C or RS232.

The company "MTS Maschinentechnik Schrode AG" based at Hayingen in Germany specializes in innovative automation solutions for civil and building engineering applications. One example of the technology is their ‘MTS-NAVI’. This 3D GPS-based navigation system using inclinometer sensors fixed to excavator shovels allows the excavator operator to control the excavator bucket using GPS information and inclinometer sensors around a digital terrain model. By resolving the actual position of the excavator bucket with its desired position the MTS-NAVI provides precise guidance and reduces the on-site surveying workload, speeding up ground works and reducing the need for reprofiling.

Antennas attached to the rear of the excavator determine its position and orientation via satellite GPS information. However, weather, atmospheric air layering and other factors can interfere with the satellite signal reception and generate positional errors. In order to calculate these deviations and to achieve the centimeter accuracy required for excavation depth assessment, correction data is required, which is generally provided by a reference base station. This transmits correction data via a radio link to the receiver box in the excavator, which in turn makes calculations using the received satellite data together with the information over the radio link.

Now it’s necessary to correlate this information with the digging claw of the excavator bucket. To determine its position all parts of the movable arm supporting the bucket are fitted with inclinometers to provide dynamic information of the arm and bucket position. In combination with control software this information is sufficient to achieve 2 cm positioning accuracy of the claws and enable excavations to a high degree of precision. As a result the excavator operator is given a realtime exact guidance of the bucket movement over the digital terrain shown on a display in the cab.

The advantages of the systems are obvious: optimized ground working, improved site safety, massive time saving in building construction and reduced costs, elimination of on-site surveying and many more novel applications previously unthinkable. Some applications that can take advantage of the technology include: channeling and pipe laying, excavating and road works, waterway dredging (under zero-visibility conditions), embankment profiling, dam building and much more.

The motion sensors chosen by the developers of the 3D excavator controller are produced by 2E and were chosen in favor of competing sensors (MEMS-based systems) because of their proven longterm measurement accuracy across the total range of temperature and angular movement plus the sensor’s compact and robust design.

Hybrid components for the highest demands