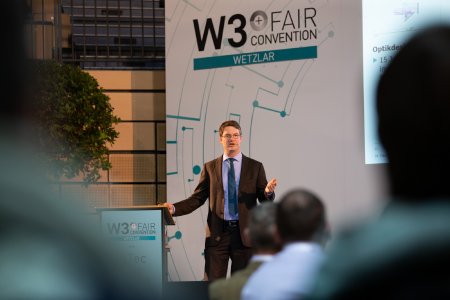 (PresseBox) ( Hamburg, 21-10-01 )
On September 22 + 23, 2021, the second networking event for experts in the fields of optics, photonics, electronics, and mechanics took place at the Messequartier Dornbirn in Austria. A new start with potential: for many exhibitors it was the first face-to-face meeting after the pandemic break. In 2022, the W3+ Fair will be held in Wetzlar/ Germany on March 16-17, and in Dornbirn on November 30-December 1.

On September 23, 2021, the two-day W3+ Fair Rhine Valley 2021 (w3-messe.de/en/), network fair for enabling technologies, came to an end in Dornbirn/ Austria. A successful restart after the lockdown: the live event attracted many interested trade visitors from the Rhine Valley to the exhibition center, where they were able to discuss the latest technological developments with the approximately 120 exhibitors, partners, sponsors and speakers. Big players like Swarotec, Bruker, Swiss Optic, Materion Balzers Optics and OptoTech but also many SMEs used the interdisciplinary meeting to position themselves for the future with new contacts and partners. In total, companies and networks from 7 countries were represented at the event. More than 35 top-class expert speakers, including speakers from thyssenkrupp Presta, Fraunhofer, CSEM, S.I.E Solutions, EOS, Zeiss Industrial Quality Solutions, Fisba, ACM Coatings and FH Ost shared their knowledge at the accompanying conference N-Tec Talks as well as at the EPIC TechWatch. The special area "Additive Manufacturing/ 3D Printing" also attracted interest, where AM Pioneers presented a world first with the Wizard 480+, the industrial 3D printing system from aps.techsolutions.

The W3+ Fair Rhine Valley was opened by Marco Tittler, Vorarlberg's State Councillor for Economic Affairs, and Andrea Kaufmann, Mayor of Dornbirn. Dr. Heinz Seyringer, CEO of the partner Photonics Austria, and Werner Kruesi, President of the Photonics Industry Sector at Swissmem, spoke at the opening of opportunities and possibilities for cross-disciplinary and cross-national cooperation and thus the potential of the fair. In its second year, the trade show and conference has secured the support of politicians and business leaders in the high-tech region. In the future, it is expected to be the central knowledge and exchange platform for resident companies in the four-county region, as well as the gateway for experts seeking access to the high-tech location. The upcoming W3+ Fair in Dornbirn will take place on November 30 and December 1, 2022.

The exhibitors also took the opportunity to network intensively among themselves. The "networking aperitif", hosted by the Swissphotonics trade association, provided a good opportunity for this. Afterwards, organizer Fleet Events with the support of Swissmem invited to the exhibitors' evening W3+ and Friends, which was very popular after the Corona break.

The photonics networks Photonics Austria, Swissphotonics as well as EPIC supported the W3+ Fair Rhine Valley as Gold Partners. A total of 16 trade associations and sponsors contributed their expertise and contacts. The cross-industry concept of the event was highly endorsed.

"It takes courage for the first live event. There was a lot of positive feedback for this. We are very happy that our exhibitors have followed this course. Certainly, we are not yet back to the old size with the Corona-related conditions, but an important step towards normality has been taken. Many companies have indicated to us that they will be back next time and would like to expand the W3+ Fair together with us. There is no better confirmation of our concept. We want to be the interdisciplinary platform where the technologies of the future are launched," says Jörg Brück, Project Director of Fleet Events.

About the W3+ Fair

The event is the result of an industrial initiative of Wetzlar and Central Hesse, which aims to promote the networking of the three industries optics, electronics and mechanics. Through cross-industry interfaces, forward-looking technologies are to be launched. The trade fair was held for the first time in February 2014 at the Rittal Arena in Wetzlar. The W3+ Fair is organized by the Hamburg-based trade fair organizer FLEET Events (www.fleet-events.de). Wetzlar Network (www.wetzlar-network.de) and the European Photonics Industry Consortium EPIC (www.epic-assoc.com) are partners. Since 2019, the W3+ Fair also takes place in the Rhine Valley, the four-county region of Austria, Switzerland, Liechtenstein and Germany with its focus on R&D.